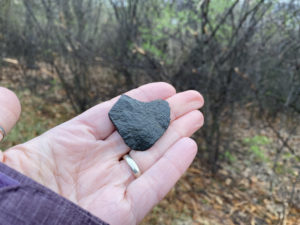 Driving into the park this morning, there was a raccoon lying by the side of the dirt road that winds its way to the trailhead. I noted its presence there, assuming, of course, that it was dead. I imagined what it might be like to stop on my way out after our walk and find natural treasures like sticks and rocks and pinecones, to arrange around the body in honor of its life lived and that life’s inevitable transition.

If you follow me on Facebook, you know that topic this is ever present after finding a male Mallard dead next to our enormous Cottonwood tree that was struck by lightning on Tuesday night. After offering my own blessing over the duck for safe passage, my husband put the body in the trash knowing if we left it and I tried to memorialize it in this way, Ritter and the neighbor dogs would have a field day.

Sometimes the practical outweighs the tug of our hearts.

But when we were driving out of the park this morning, the raccoon was up on its feet, wobbling along the road, sodden from the light rain and weary from whatever illness or injury it was weathering. I stopped the car next to it to say hello and offer whatever I could. Head lowered and eyes squinted against the rain, the raccoon glanced up at me and we had a moment of connection.

“I’m sorry,” I whispered. “I wish there was something I could do.” After some time, I began to drive away.

My heart heavy and feeling suddenly panicked to do something, I pulled the car over to look up a phone number. As Google was sending results for my search, I mused how being with the dying is my work and somehow here with this raccoon I was flooded with feeling helpless and thwarted. Do something. Do something. Do something. This was both a mantra going through my mind, but also an energetic imperative in my body. I was poised for action: Who can I call? Who can do something about this? Who can put this poor raccoon out of its misery?

I dialed the city parks department to let them know – the only thing I could imagine doing beyond calling the DNR. It was before-hours so I left a message, feeling silly but satisfied that I had done something. Which, I acknowledged to myself even as I was pleading the raccoon’s case to the ether, was really only passing the buck.

If not me, let someone else take care of it.

Shortly after arriving home, my phone rang – the woman from parks and rec called back and kindly thanked me for my message, but said that we needed to let nature take its course.

Which left a larger question looming: What is there to do when there is nothing to do?

And then I remembered, as most of us in the helping professions still need to be reminded, that our real job is to be there. To hold space. To bear witness. To let our presence be enough.

In fact, to trust that our presence is everything.

This is exceptionally difficult and important inner work conditioned as we are in a culture of doers, of fixers, of advice-givers, of people typically so unfamiliar with the idea of owning our own discomfort that we project our need to feel better on other people by doing something – hand them a Kleenex, give them a hug, tell them everything is fine even if it is far from it, anything! – to make them feel better.

Of course we do. There is nothing quite so perfectly, beautifully, and messily human than that. Seeing others suffer brings up the response in us of wanting to make it go away – mostly because if they can suffer, so can we. It’s not too far a leap, especially when we are present with someone ill or dying, to extrapolate the situation so that suddenly we are the person in the bed.

Or the raccoon, sodden and weary – and dying – on the side of the road.

If we are acting from that place of personal discomfort in being reminded of our own mortality, as I was naturally and humanly drawn into this morning, we are making it about us instead of truly being with the one who is suffering, exactly where they are – regardless of how uncomfortable it is for all involved.

Holding with tenderness the reality that as living beings, death will eventually come for us all.

This isn’t an easy boundary to be aware of, but an essential one. There is such sweet relief in the compassion that comes of honoring our shared impermanence. Of course we don’t want others to suffer, and of course we don’t personally want to suffer either. Easing suffering is a noble and worthy pursuit. But it feels important to be willing to reflect on and inquire as to our deeper, often unconscious, motives – how far is too far when we are intervening on behalf of others?

What do we do when there is nothing to do?

When is our job to manage our own discomfort, trust in the power of our presence, and be willing to let nature take its course?//